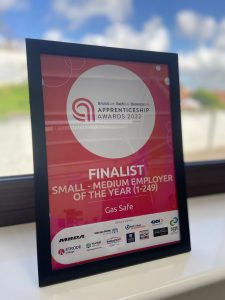 Gas Safe are incredibly proud to announce the runner up spot in the annual apprenticeship awards amongst stiff opposition including GKN aerospace, MBDA Missle systems, Wessex Water, Intoheat and many more excellent business’s.
Gas Safe are honoured to have 8 apprentices covering a wide range of important roles including Plumbing, Heating, Electrical, Air Conditioning, Solar PV and business management.
Investing in the future workforce is a crucial part of a sustainable business and is a great way for young people to enter our exciting industry with an ever changing landscape. All of our apprentices are highly valued and extremely an important part of our continued success story. They never fail to rise to a challenge and consistently produce excellent quality work in their chosen field.
We love to see these young people develop work and life skills and grow with us, carving their own path to success, they are all champions in our eyes!

All Our engineers are highly trained and Gas Safe Registered. The picture attached is from one of our recent Gas Combination (Combi) boiler replacements. As you can see the new Vaillant gas boiler looks more modern than the old one adding to the modern look of the kitchen.

Our client was very happy with work carried out and the improvement of hot water pressure the new Vaillant gas boiler has given them.

This job was completed in just one day and the system was Chemically Power Flushed. Our gas safe registered engineer removed the old boiler from the property along with all the packaging from the new gas boiler. Inhibitor was added to the system water to help prevent corrosion inside the pipework, boiler and radiators.

Additionally, new thermostatic radiator valves were installed to the radiators to help control the temperature in each room. A programmable room thermostat was installed in the hallway to help prevent the house from over heating. All controls were shown and demonstrated to our client so they know how it use them.

This boiler comes with a 7 year warranty that covers parts and labour. 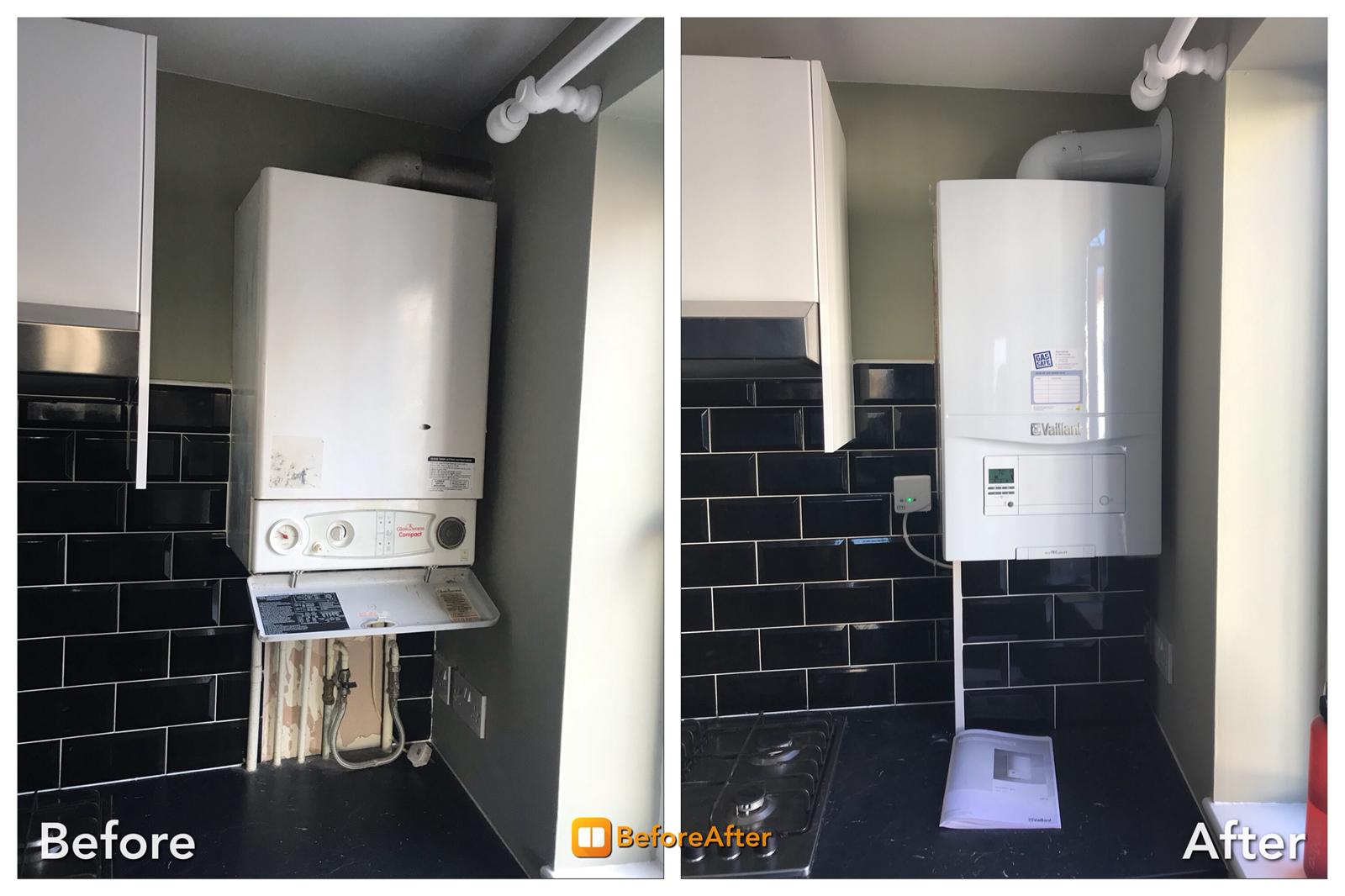 Why Should You Have Your Gas Boiler Serviced?

Having your Gas boiler serviced annually is essential to guaranty the safe and efficient operation of your appliance. Your boilers warranty may also be void if the appliance is not serviced each year. Here at Gas Safe our engineers are trained to maintain all different makes of boiler. Valliant, Worcester, Baxi, Ideal, Potterton, Viessmann, Vokera, Glow-worm – are all makes of boiler we work on.

END_OF_DOCUMENT_TOKEN_TO_BE_REPLACED

What Is a Combi Boiler?

A combination boiler or combi boiler is a gas central heating boiler that is also an instantaneous water heater. A combi boiler is an ingenious space-saving idea, and an increasingly popular choice in UK homes. In fact, combi boilers now account for well over half of all the new domestic boilers installed in Britain every year.

A combi boiler is both a high-efficiency water heater and a central heating boiler, combined (hence the name) within one compact unit. Therefore, no separate hot water cylinder is required, offering space saving within the property.

Further benefits of a combi boiler includes hot water being delivered through your taps or shower at mains pressure. So you can enjoy powerful showering* without the need for a pump.

How Does a Combi Boiler Work?

A Combi boilers works the same as a standard boiler by burning gas and producing heat. This heat is then used to warm the water passing through the boiler using a heat exchanger. With a standard boiler that water would then flow through your radiators or hot-water cylinder. A Combi boiler works differently by having a second heat exchanger that transfers heat from the main heat exchanager to the mains cold water passing through the boiler when a hot tap is tuned on.

What Are The Benefits of a Combi Boiler?

Make sure you have an adequate supply of water coming from the mains. If the mains pressure is weak or inconsistent, your showers and taps will be too. This single flow of water is also a problem if you have several showers, baths and sinks that need to be used simultaneously as the flow will try to split between them all and weaken as a result.

If you have a higher demand for hot water then a high efficiency, condensing system or conventional boiler may be the answer.

All condensing boilers require a condensing pipe to drain the condensed vapour and dispose of it down a drain. If the installer can’t add a pipe where the existing boiler is positioned then it may need to be relocated; this may add to the cost of installation.

Who Are The Leading Manufacturers of Combi Boiler?

The main manufactures of combi boilers in order of our own recommendation are:

The Drawbacks of Combi Boilers

Despite the popularity of combi boilers, there are several issues that you should bear in mind when considering replacing your boiler.

The disadvantages of combi boilers include:

At Gas Safe Bristol, we provide a complete combi boiler service including installation, emergency repairs and servicing. If you need a combi boiler installed, or aren’t sure which boiler to go for, we can help. Call one of our team today on Bristol: 0117 964 0078 , Somerset: 01934 811 566 or fill out a contact form and we’ll get back to you.

Buying a new boiler tends to be a decision that most people need to make in a hurry. Usually, your old boiler has broken down, it’s the depths of winter and you need to get your hot water and central heating restored to its former working glory.

END_OF_DOCUMENT_TOKEN_TO_BE_REPLACED

As a landlord you should be aware that you are responsible for the safety of your tenants. Your legal duties apply to a wide range of accommodation occupied under a lease or licence, including (but not limited to):

The Gas Safety (Installation and Use) Regulations 1998 outline the duties of landlords to ensure gas appliances, fittings and chimneys/flues provided for tenants are safe.

END_OF_DOCUMENT_TOKEN_TO_BE_REPLACED Save Money by Installing a Programmable Room Thermostat

The average household spends more than £1,200 a year on energy bills – nearly half of which goes to heating. Homeowners can save about £120 a year by properly setting their programmable thermostats and maintaining those settings

A programmable thermostat helps make it easy for you to save by offering four pre-programmed settings to regulate your home’s temperature in both summer and winter – when you are home, asleep, or away.

END_OF_DOCUMENT_TOKEN_TO_BE_REPLACED

Our advert was recently featured in ‘What’s On Bristol’, a popular magazine read by 1000s of Bristolians. Check out the advert here.

END_OF_DOCUMENT_TOKEN_TO_BE_REPLACED

Why Choose Gas Safe to install your new Gas Boiler?

A family owned and run business that has been servicing Bristol and the South West for the last 15 years.